We believe every child has the right to the support they need to be functionally literate when they leave primary school. We want Bristol to be a city that reads to its children and fosters a lifelong love of reading, from an early age.

So what are we doing to tackle these issues? Ablaze has an established Reading Partners programme which puts trained volunteers into primary schools to buddy a pupil for a year.

We are also working with Bristol City Council’s Reading City initiative, which is setting up ‘cloakroom libraries’ in children’s centres and early years settings to encourage young children and their parents to share books together and provide a space for volunteers to read with children.

Please join us in our work to tackle the issue of functioning illiteracy. We would really appreciate your support. An hour a week of your time could have a huge impact on a child’s life and help to improve their reading skills. Donations can make amazing things happen for Ablaze and the Reading City.

You can donate to Ablaze here – your donation can make a difference.

If you would like to find out more about Reading Partners, or any other programmes that Ablaze runs, please contact us. 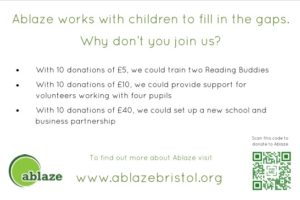 Why our literacy campaign matters

Literacy is one of the fundamental skills we need to function and thrive in our lives. Ablaze believes that every child has the right to leave school with good enough literacy to make the most of their future potential. Literacy matters, not just for individuals but for our collective community. Our vision of Bristol as an inclusive, prosperous city relies on us supporting all our children to reach the expected standard they need before they leave school.

Lacking vital literacy skills holds a person back at every stage of their life. As a child they won’t be able to succeed at school, as a young adult they will be locked out of the job market, and as a parent they won’t be able to support their own child’s learning. This intergenerational cycle makes social mobility and a fairer society more difficult.[1]

Bristol City Council’s ‘State of the City’ report for 2019 states that 64% of 11-year olds in Bristol achieved the expected standard in Reading Writing and Maths combined. This means a staggering 36% did not. That’s more than a third of our children leaving Primary School with insufficient literacy skills. Clearly, we still have work to do.

Here are some statistics on literacy from other organisations working in the field. They show the scale of the challenge we all face.

16.4% of adults in England, or 7.1 million people, can be described as having ‘very poor literacy skills’ in other words they are functionally illiterate.

Children who fail to reach the expected standard at aged 11 are three times more likely to experience mental health problems as adults, and twice as likely to be unemployed aged 34.

Read On Get On 2016 Report (from Save the Children and National Literacy Trust research together):

A quarter of 11-year-olds in England, and close to half of disadvantaged children, were unable to read well when they left primary school last year (2015). This will prevent them from achieving their potential in secondary school, and beyond, and creates obstacles to a fairer society.

The reading gap between boys and girls in England is one of the widest in the developed world. Children from poorer backgrounds are also more likely to fall behind.

Bristol City Council ‘The State of the City’ Report 2019:

Parents, we appreciate it can sometimes be difficult to fit in time to read with your children during or at the end of your busy day.  It can also be a challenge to know how to support your child through their journey in mastering literacy. However, it has been proved that just 10 minutes a day of reading with an adult can significantly increase a child’s chances of becoming a fluent reader before going on to secondary school. Read, sing or share stories with your child for just 10 minutes a day from birth and you will be rewarded with seeing their confidence & ability improve.

Here are some tips to help you get started:

Ablaze would like to encourage all parents to spend a little time helping your children learn to love books and reading By following these useful tips, we hope that you and your child can flourish in the enjoyment and fun that reading can bring.

The Book Trust website has some fantastic recommendations of books to read by age or genre, including their 100 best books for children and the brilliant Bookfinder.

Your local librarians will always be happy to recommend books. Bristol Libraries have produced lists of book suggestions for 6-8 year olds and 8-11 year olds. If your local library doesn’t have the book you would like, you can search the Libraries West catalogue and order books or audiobooks to be delivered to your local library – ask your librarian if you need help with this.

If you still need some inspiration for what to read, here are some of our staff, trustees and volunteers’ favourite books:

My daughters are 19 and 17 now and we still read together occasionally, although mostly we watch reality TV together! I’ve chosen three books that we all loved when they were little

My children are 18 and 15 now, so we don’t really sit down for a ‘bedtime read’ anymore. That was our favourite time of the day when they were little. I’ve still kept all of our favourite books in the loft as I can’t quite part from them. It was really hard choosing my favourite three:

My two boys are now 8 and 11, and spend a lot of time reading Tom Gates, Wimpy Kid and The Beano; they listen to audiobooks a lot too. We had so many favourite books when they were small, but here are a few that were requested again and again.

I’ve got a gorgeous niece who is 27, and a fabulous nephew who is 8, so I thought I would ask them about their favourite books. Here’s what they told me…

My son, now aged 12, and I have a shared love of books and reading together has been great fun – we both really get into the books. Here are 3 of our favourites.

What a difficult task this was! My children are now 31 and 33, but I have a box in the loft of their favourite books from childhood. If I have to pick just three, then I have chosen these somewhat at random as there are dozens of others I could choose.

Burglar Bill by Janet and Allan Ahlberg – This was one of my favourite books as a child. My mum would read it with me, and I can still remember the voices she would put on for the characters. Funny and sensitive with lovely illustrations.

The Jaquelin Wilson Collection – These were some of the first books I remember reading independently. I was curious about people, and I loved how the stories gave me insight into different lives as they are all about relationships, friendships and family.

The Confessions of Georgia Nicolson by Louise Rennison – Hilarious reading for a young teenager. I was obsessed with these books in my early teens. I would wait eagerly for the next release and stay glued to the page until I had finished it, my first experience of being totally engrossed in a book.

Famous Five Colour Short Stories by Enid Blyton – These are a collection of new short stories set in the world of Enid Blyton’s best-loved series. The books are still based around the adventures of Julian, Dick, Anne, George and Timmy the dog, but written in short chapters with vibrant, colourful pictures on every page – perfect for shared reading or for newly confident readers to enjoy independently. They reminded me of the fun I had reading the original series when I was young!

Story Treehouse books by Andy Griffiths and Terry Denton – A funny collection of books that my children loved. The illustrations add so much to the books. Written in the first person they are funny and imaginative – perfect for kids to read on their own.

The Lion the Witch and the Wardrobe by C. S. Lewis – A book my daughter and I read together. A true classic that transports you to a magical world. Wonderful character and setting descriptions brings the story to life with the perfect amount of imagination, magic and adventure!

Recommendations from our Reading Buddies

We asked volunteers and pupils who take part in our Reading Buddies programme for their favourite children’s books. Here are their suggestions.